Existing home sales rose 1.8 percent in May to an annualized 5.530 million which, though only modestly above recent readings, is still the best rate of the cycle, since back in February 2007. The year-on-year rate, in line with a long run of flat sales, is soft at only plus 4.5 percent.  Crude oil inventories fell 0.9 million barrels in the June 17 week to 530.6 million, the fifth weekly decline in a row.  The year long decline in the active rig count has finally brought production below demand.  The summer driving season is eating into stockpiles, and the price per barrel of oil is in the high $40 range.  Strong and welcome strength is the signal from jobless claims which are at historic lows and trending lower. Initial claims fell a very sharp 18,000 to 259,000 in the June 18 week.  Activity this month is moving higher from a cycle low in May for Markit’s U.S. manufacturing sample where the June flash is at 51.4, up from 50.7 in final May.   New home sales fell a severe looking 6.0 percent in May but the annualized sales rate, at 551,000, is second best of the cycle.  Skewed by a since-reversed rise in jobless claims, the index of leading economic indicators fell 0.2 percent in May.  Minus signs spread across the durable goods report with total new orders down a very sizable 2.2 percent.  Consumer sentiment was solid going into Brexit, at 93.5 for final June vs 94.3 in the mid-month flash and against 94.7 in May.

It’s a slow growth economy, but there are a few concerns, with new home sales falling in the usually strong spring, the leading economic indicators slipping, durable goods orders down, and consumer sentiment slightly down.  My eyebrow is raised.

Clearly the big deal of the week was the Brexit vote, with Brit’s voting to leave the EU.  It will take about 2 years to finalize the exit.  It came as a surprise to the markets, and a global selloff ensued on Friday.

The market got hammered yesterday, down about 3% on the S&P, in response to the Brexit Leave vote.  Since I was mostly in cash, having sold into the last rally, I was largely unaffected.  MACD has just turned down, never a good sign for the short run.  The RSI fell so fast, it is almost oversold in the short run, but other factors seem more important now.  The great trading range continues, with the market approaching a breakout, then failing again and falling back.  The bull market looks tired. 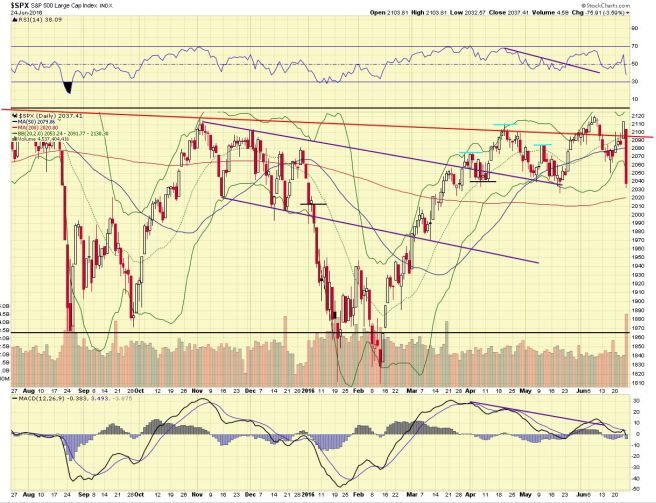 The market will look for stocks with a heavy exposure to England and punish them.  Uncertainty will reign for a week, maybe two.  The market is overvalued by the PE ratio of the S&P 500, and it could use this as an excuse to sell off more.  Eventually we will get to a buying opportunity for us swing traders.

I had a buy order for some Apple at 94, but before the market opened on Friday, it traded at 93 in the pre-market, so I changed my buy order to 92, which did not fire yet.  Apple sells at a PE of 10, quite a discount to the S&P up at 23, and it yields 2.4%.  They will go into a new product cycle in Sept. with the iPhone 7.  Apple will not grow as fast as it did while the iPhone was less mature, but it has become a solid mature company.  That is why Apple has fallen from $130 per share down to 93; it lacks the growth characteristic it once had.  It is not blowing away, it has a huge cash hoard, and it has future opportunities to innovate, with a virtual reality product, and it is working on a self-driving car.  Who knows?  Now I only buy Apple on pullbacks (but I like to buy everything on pullbacks!).

If you enjoy these updates, please tell your friends and family who are interested in the stock market about this blog.

Your comments and questions are always appreciated, so feel free to comment or ask!

We’re looking at the chart of the DJIA from the March 2009 low.

The market has managed to move up slightly above the down channel it has been in since last July, that’s good (maybe).  The market has NOT been able to break out to a new high, and until it does, the continuation of the bull market is at risk.  MACD down at the bottom of the chart looks like it may roll over and give a MACD sell signal.  The market is also showing a long term double-top right at 18,000 on the Dow, and if we don’t break out to a new high, a double top is a negative sign. There are more things I dislike about this market, than I like, technically.

I’ll be glad when the Brexit vote is over, and I don’t honestly care which way it goes.  I don’t think it will affect the US market for more than a week or two, either way.  The more soothing outcome for the market will be a STAY vote, as the markets hate uncertainty, and we would not be certain how much the EU would try to punish Britain, or how many other countries may try to follow Britain out of the EU.  We’ll soon forget about it and begin to focus on what we are supposed to focus on, Q2 earnings reports start with Alcoa on 7/11.

One positive for the market in the second half of the year will be the value of the dollar.  Last year in anticipation of higher rates, the dollar soared and negatively impacted the earnings of the multi-nationals.  The rate hikes have not materialized, and the dollar has softened.  So, this year, we will be comparing better numbers to poorer number from last year, and revenue and profits should have a tailwind in being able to show growth.  It won’t save the market by itself, but it will help.  (You may want to review my two part series on the US Dollar on April 27 and May 4 for more info on the dollar.  Sonya?)

I went to the S&P site just now, and with 98.3% of the S&P reporting, the P/E ratio on the trailing 12 months GAAP basis is 24.04, the highest we have seen in this bull market.  That means the valuation of $1 of earnings is the highest in years, and with China and Europe both sluggish, one has to wonder what would propel the market to a richer valuation?

I have not been very active lately, and it has not hurt me.  I would buy a quality name that is undervalued, especially in an oversold market, but this is not generally available to me right now.  I remain cautious.

If you think the information in this blog is beneficial, please mention it to your friends or family who are interested in the stock market and improving their investing.

Your comments and questions are always appreciated, so feel free to comment or ask below!

Retail sales rose a very solid and better-than-expected 0.5 percent with strength evident, though to a less degree than in April.  May’s producer prices final-demand index rose an almost fierce looking 0.4 percent for the hottest reading since May last year.  Crude oil inventories shrank for the fourth week in a row, falling 0.9 million barrels in the June 10 week to 531.5 million.  Whatever pressure may be building in import & export prices or even producer prices, has yet to give much of a boost to consumer prices which rose only 0.2 percent in May. Core prices, that is prices excluding food and energy, also came in at plus 0.2 percent.  Jobless claims data rattled a bit in the latest report but are still trending in the right direction — which is down. Initial claims rose 13,000 in the June 11 week to 277,000, but the 4-week average is down slightly.  Housing starts did slip 0.3 percent to a 1.164 million annualized rate in May but the trend is positive with the year-on-year gain at a very strong 9.5 percent.

Of course the big news was the expected announcement on Wed. that the Fed was leaving interest rates unchanged at .5% on the Fed funds.  It had looked like they would hike in recent months, but the June 3rd weak jobs report, and the fears over Brexit, caused them to postpone the hike.  Longer term US treasuries have rallied, driving interest rates down, with the 10 year bond yielding 1.4%.  Ordinarily this would signal weakness in the US economy, but in this case it is probably signaling a global search for yield, as both Japan and Europe have negative interest rates.  By taking money away from the banks for letting the central banks hold it, they are trying to get the banks to lend it out to business and stimulate the economy.  Their economies are simply not taking the bait.  I don’t know if there is that little entrepreneurial spirit in those regions, or if business see that little demand so they will not start up or expand, or if the banks have that little faith in the proposals presented to them and think that losing .5% a year to a central banker is a better deal than losing 10-20% of a sizable loan.  The zero and negative interest rates, and the resulting low yield on the longer dated bonds, hurt savers and safe investors like insurance companies (who have to plan investment income into the cost of their policies), and they are not stimulating economic activity, so I think they have become net negatives, yet the central banks continue to pursue this policy.

The biggest deal is the Brexit vote in England on Thursday 6/23.  The markets would like to see England remain in the EU, and on a “Stay” vote you could see the market rally temporarily, or drop on a “Leave” vote.  I just don’t see this having much impact on the US, except that the CNBC talking heads talk about it incessantly.  But, the markets do react to it.  A week after the vote, we will get back to normal and focus on earnings reports, which will start again around July 10th.

The great trading range continues, from 1810 to 2130 on the S&P.  We see another failed attempt by the market two weeks ago, to try and break out to a new high and get back in bull market mode.  RSI has fallen to neutral at 45, and MACD has turned down showing weakness in the short run.  The market seems vulnerable in the short run, due to the Brexit vote on Thur. 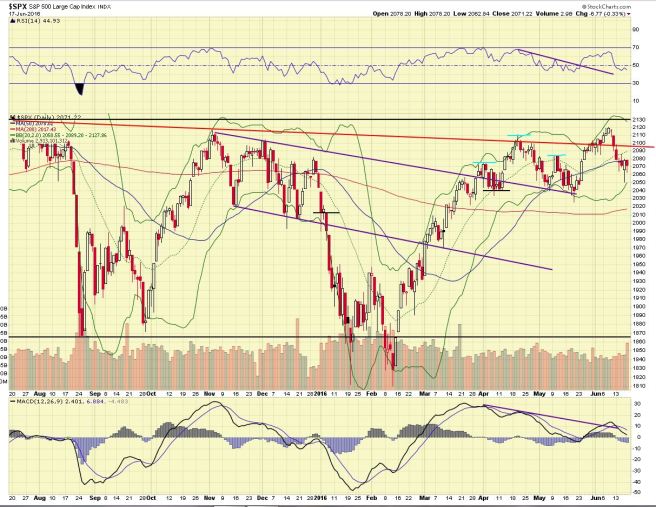 Earnings have been weak for several quarters, and the market remains overvalued with the trailing 12 month GAAP PE up at 23.  This is cautionary.

Utilities have rallied as treasury yields have fallen and people search for yield, but the valuation on utilities has been pushed up beyond historical norms as people have piled into them (called a “crowded trade”).  We have seen big pullbacks the last couple of years on utilities whenever the market thinks rates could be starting a sustained move up, and that will happen again in the future.

If you enjoy these updates, please tell your friends and family who are interested in the stock market about this blog.